My stepdad came last week for a visit for his 80th birthday. Dad likes to go to the gym on Mondays, Wednesdays and Fridays. Not Tuesdays. Tuesdays are when he has grapefruit for breakfast. I’m not sure what the connection is between the two, but it’s important to him. Poached eggs are on Saturday, which is also not a gym day.

Dad is a creature of habit. We respect that. He’s had enough to deal with this year. His wife (my mom) of 49 years passed away earlier this year. So when he came to visit we quickly rejuggled our calendars so he didn’t have to. 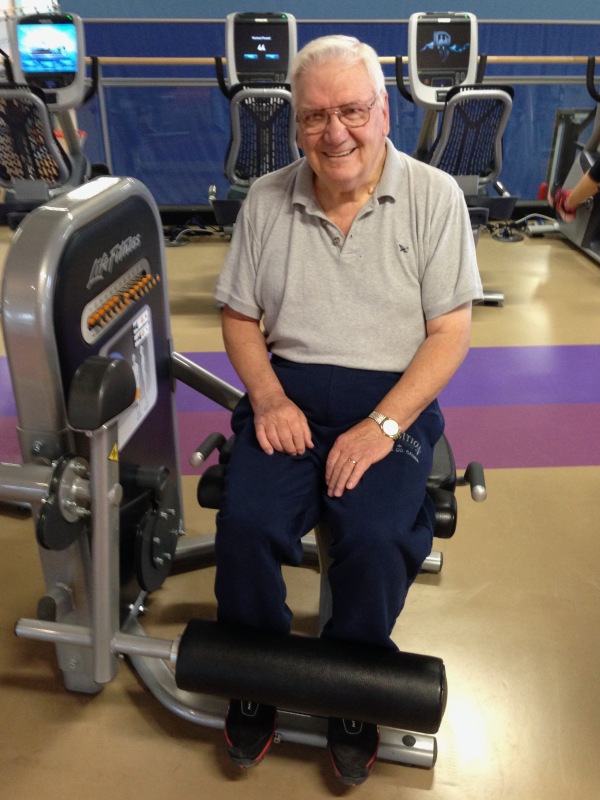 I took him to the gym on the aforementioned “gym” days. My daughter, who’s a personal trainer and works at the gym, quickly showed him around. He gravitated towards a circuit that’s popular with both seniors and women. That suited him fine. When I went over to check on him, I always found him chatting with at least one – often two – people who were also doing the circuit. I noted that the people were usually women.

Dad loves to chat. Through his life, he has raised chatting to a fine art. At various times he’s been a door-to-door salesperson, a bartender and a chimney sweep. All of these careers involve chatting. I, on the other hand, am a terrible chatter. I suck at small talk. But Dad can chat all day. The women he cornered for a chat session were – without exception – very gracious. They patiently listened while Dad went on about the importance of exercise, his desire to buy an adult tricycle to ride to the grocery store, his intricate recycling regime or the small town he’s called home for most of his life.

Dad’s a bit of a charmer.

He also understands the ground rules of chatting. He didn’t bring up his recent heartache or complain about his situation. That’s not Dad’s style. He is unflinchingly positive. Besides, you don’t “chat” about deep stuff. Chatting skips lightly across the surface of interpersonal conversation. Chatting lays the groundwork for more permanent social connections.

To be honest, if Dad were a stranger to me, I probably wouldn’t have been nearly as gracious as the women in that gym. I work out with earphones. I block out the other people in the gym. I am also not very patient with unscheduled social interruptions. I’m there to get shit done, not partake in small talk.

But I learned a lesson this past week. As I watched from across the gym, my eyes teared up as I saw Dad grinning and chatting away with his new friends. I saw him engaging with other people. That’s a very big deal for Dad. He lives alone in a small apartment in a very small town. He can go days without a conversation that lasts longer than a few seconds. While Dad loves to chat, he’s also quite content to read a book or do a word search puzzle sitting in his favorite chair. He’s in the midst of readjusting to a life that has just had a heart-sized hole ripped out of it. His social circle was based on an orbit of two and he hasn’t quite got around to rebalancing it based on flying solo.

So, thank you women of the local Y. Not only did you make an 80-year-old man very happy by taking a few precious moments to listen to him. You also made me realize something vitally important: we need chatting. We need to bump into people, face-to-face, and make the mutual agreement to free up a few minutes from our rigid agendas to partake in shooting the breeze. More and more of our social connections are becoming digital. It’s more efficient, true, but it doesn’t recharge our emotional and spiritual batteries the same way a real, live conversation does.

If you’ve ever doubted the value of chatting, you should spend some time watching a recent widower connect with total strangers he bumps into – talking about nothing at all and not being productive in any measurable way. You need to watch how his hands gesture as he talks, how he leans forward into the interaction and how his eyes start to sparkle again. Dad comes alive when he chats. And a few moments of my time spent being on the other side of that interaction seems a very small price to pay.

More and more of our lives are being spent in navigating solitary straight lines from Point A to Point B. We need to meander more. We need to leave time for serendipity. We need to delay our workout long enough to hear how a random man we met at the gym is reading a book he just got for his 80th birthday about how the Scots helped to settle Canada.

Why is that important? I don’t know. Probably for the same reason you don’t eat grapefruit and go to the gym on the same day.

3 thoughts on “Conversations Overheard at the Family Y”

This site uses Akismet to reduce spam. Learn how your comment data is processed.

My Tweets
Join 1,701 other followers